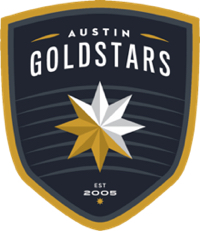 The Austin Goldstars Soccer Club is a predominantly LGBTQ+ non-profit organization that provides people an opportunity to play and learn soccer in a positive and friendly environment. No one shall be discriminated against on the basis of age, race, sex, color, religion, national origin, handicapping condition, gender identity, or sexual orientation.

The Austin Goldstars Soccer Club was formed in the summer of 2005 and has participated continuously in Austin Men’s Soccer Association (AMSA) spring and fall league play since spring 2007. The Goldstars have consistently performed at a high level often winning the league. In 2013, we expanded to two teams; competitive and recreational due to the high number of players interested. Recently, we’ve even added an indoor team. In 2016, our competitive team won our outdoor league as well as our indoor team winning their league in 2017 and 2018.

Goldstars’ players have also participated in International Gay and Lesbian Football Association (IGLFA) summer competitions over the past few years; once as partners with Toronto (Washington, DC in 2009) and twice with the Twin Cities Jacks (Cologne, Germany in 2010 and Vancouver, British Columbia in 2011) and the Paris Gay Games.

Goldstars Board Members are elected annually. Please feel free to contact them if you have any questions or concerns. These positions are open to all. If you’re interested contact the President.

If you have any questions, please ask us!